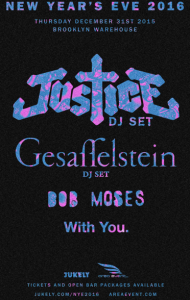 This New Year’s Eve, a select amount of lucky party-goers will greet 2016 in a secret, exclusive Brooklyn warehouse dancing to tunes and beats crafted by the world class artists of Justice, Gesaffelstein, With You, and Bob Moses. Known for its hip, vibrant, and young crowd, Brooklyn is the perfect place to throw such a party, which will be characterized by a diverse array of EDM music, exciting people, and great amounts of fun.

The French duo, Justice, is arguably one of the most influential active electro house artists today. In 2009, they won a Grammy Award for their famous song “Electric Feel” and have gained great recognition at awards ceremony led by MTV and Victoires de la Musique. New Yorkers have been waiting far too long for their return to the city, for the last time they performed here was two years ago in 2013 during Ed Banger’s 10th Anniversary tour. To understand the caliber of Justice, one need only look to Spotify where Justice’s song “D.A.N.C.E” has received over 30,000,000 listens!

Another major highlight of the night will belong to the performance given by Bob Moses, a duo that traces its roots back to New York. The artists behind this act, Tom Howie and Jimmy Vallance, are a rare breed in the EDM scene because their work strikes the perfect balance between beat and lyric. These artists meticulously plan out and interplay these two components to create an artistic piece that is both moving and absolutely danceable. Some of Bob Moses’ more famous songs are “Too Much Is Not Enough” and “All I Want.” But, their most anticipated work comes from their new 2015 album, “Days Gone By.” People who come to Brooklyn to party with Bob Moses will surely have an opportunity to listen to their newest work live!

Gesaffelstein is another famous act that will treat listeners to quality EDM. One area that helped him rise to fame is his cooperation with the popular music stars Lana Del Ray, Kanye West, and Daft Punk. Gesaffelstein, or Mike Lévy, is also known for his work on the remix of “Shockwave,” which was featured in the video game Grand Theft Auto. But, apart from his substantial relationship to popular culture, Mike is a talented producer that gives listeners only the highest live performances. Although placing his work within a certain genre is impossible due to its one-of-a-kind nature, people often label his music as techno or electronica. Some of his more famous songs are “Pursuit” and “Hell and Glory” (both of which are found on his 2013 album “Aleph”).

Finally, With You will also perform this night. They have been active in the underground scene for some time now and although not as famous as the previous three artists are rising stars in EDM. After listening to their music on Spotify, I was impressed by how smooth their music was. “Felt This” has a danceable beat with a dreamy melody. I look forward to hearing their performance this New Year’s Eve; I can tell that they will keep the crowd groovy and make the party a memorable experience for all attendants.

All of these artists will offer an amazing night for anyone present. They are respectable figures in the EDM scene and have a proven record of throwing some of the world’s best quality parties. Furthermore, Jukley and Area Event are hosting this event, which means that all participants can expect the highest of care and accommodation. There will be food, great drinks, and many happy people to spend the New Year’s night with. Combined with great music, this will be one of the best parties of NYE! Tickets are selling out, so make sure you order yours today!