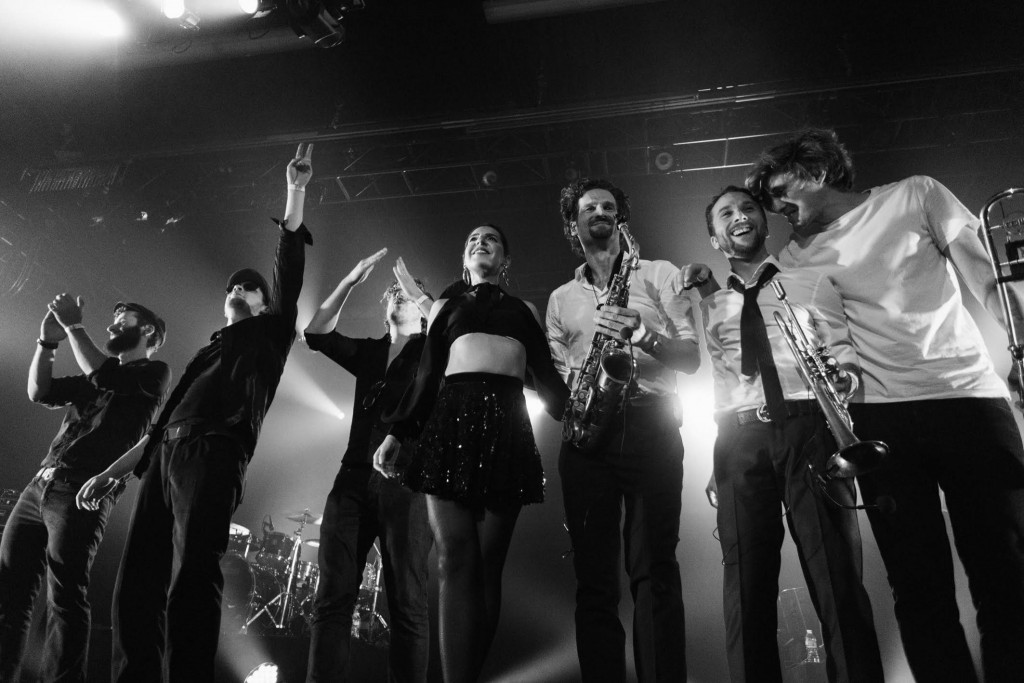 The line was down the block & the dance floor was packed. You’d think this was for a superstar DJ or an extraordinary rapper, but you’d be wrong. Parov Stelar had earned two nights at the legendary theater right in the heart of Times Square. Not bad for a group making their American debut. The Friday night sold out so they added a Saturday night show. The eclectic mix between classic swing, modern production sensibilities and a live trumpet, sax, trombone, bass & guitar really knocked it out of the park.

The city was dressed to the nines to celebrate their arrival. The crowd was a bit older, a bit wealthier, and a bit more sophisticated than your average rave or club night. Parov Stelar attracted some of the more mature end of the dance music population here in Gotham. The fashion was definitely kicked up a notch with plenty of suits, vintage swing looks, suspenders & top hats to go around. You know that girl who keeps asking you to go to swing dance lessons with her? She was there with her swing outfit on point. There were definitely some young party kids, college kids & the occasional couple just out of school who were really feeling the vibe. No fights, no stupid fronting bullshit and certainly nothing to get in the way of enjoying the evening. Even the opener Horizon Wireless, who win the title for both best and worst opening band name I’ve heard all year, did its job.

Horizon Wireless is a duo of bearded native New Yorkers who shocked us with their competence, live production values and jamming flow. While most of us had probably not given a second thought to the opener, Horizon Wireless grabbed our attention & didn’t let go. They had a little bit of a jam band feel going on, but they never noodled for too long or expected the crowd be overly hippie about it. The duo produced the full spectrum of sounds with a drum kit & a DJ setup, which was pretty impressive as it was 100% organic, with very few cuts or samples, if any. The power never got too overwhelming, and they served their function as a tension & energy builder delightfully. The venue was at capacity when Horizon Wireless thanked us for the time and we cheered for them heartily. Not just because of their great set, but because we’d be seeing a group we’d been waiting for since that one Catgroove video went around the internet years ago.
[youtube http://www.youtube.com/watch?v=twqM56f_cVo&w=600&h=350]
For a lot of us, that was our intro to Parov Stelar, but we didn’t know a couple of things. First, most of us had no idea the group was Austrian, but more importantly, a lot of the audience squealed with audible delight when we realized we’d be getting a full band performance. The live instrumentation killed it. Not only did they add an extra brassy punch to the syncopated swing getting pushed out, but there were solos by members of the band, which gave it a distinct feel that it wasn’t just a DJ set. The trumpet screamed, the trombone soared, the sax sung & the bass player strummed out some of the best solo work New York had seen in months. 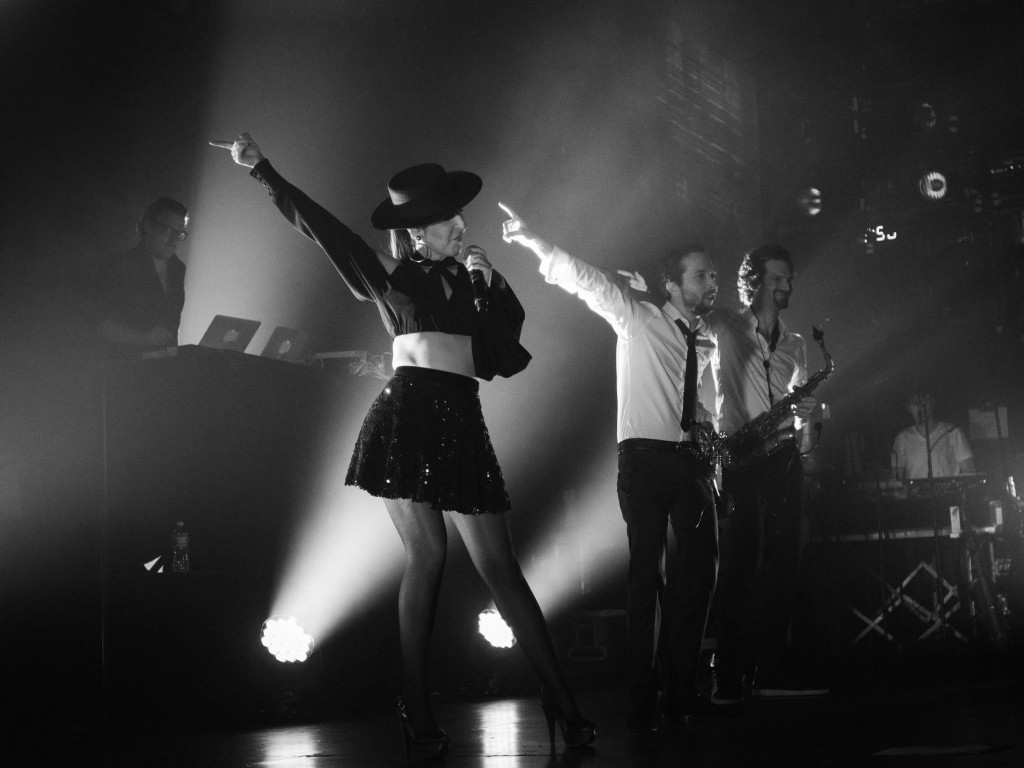 The lead singer was in a league of her own. Sultry, smooth, and moving in ways that seemed impossible in those heels. She kept the crowd hanging off of her every word, with both fashion & a style that ensured no one went to the bathroom, left the dance floor or even took their eyes off of her. She commanded the stage, only stopping to hand the mic over to the trumpet player for a moment. We’re glad she did, because we found out that the trumpet player was a New Yorker just like the crowd! This sent the people into a flurry of cheering & energetic floor stomping. 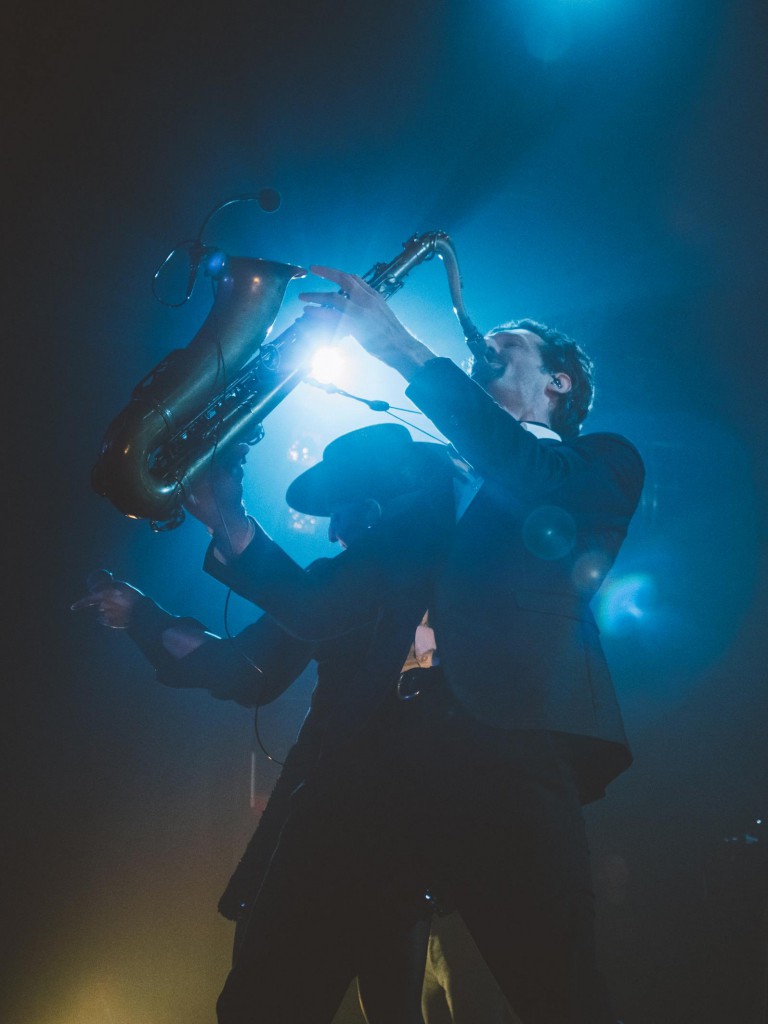 I’m not sure how to describe the enthusiasm of the amassed group of individuals here, other than to note that there were audience members who were straight up screaming instead of clapping after every song. That’s right, just like the days of heady jazz music, the sexy sax player was earning legit screams from women in the crowd. You may be famous, but until you have random attendees losing their voice because they’re screaming as if they’re watching Elvis Presley, you won’t be Famous. The mandatory encore was not slouch either. 5 songs to satiate the hungry electroswing fans, and I assume the Saturday show was more of the same. A stupendous performance, start to finish, and one we hope is repeated very soon. Parov Stelar had a great introduction to America and we can’t wait to welcome them back to Gotham City.