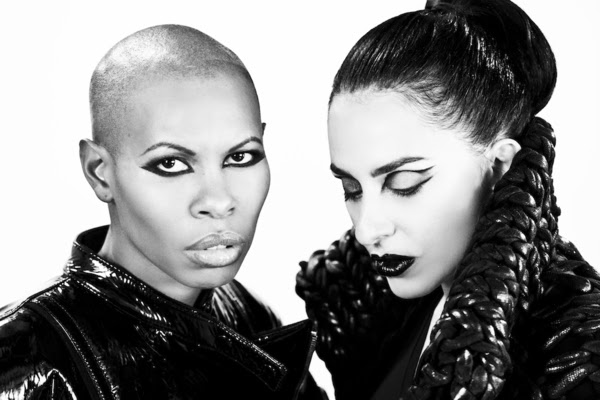 Skin & Nicole Moudaber
Following the launch of the video for their first single “You Like This” video which premiered on THUMP‘s website and VICE’s Snapchat Discover channel, Nicole Moudaber & Skin are back with the second track of their double single release, “Someone Like You.” The music video shot entirely in black and white features starring roles for both Nicole and Skin, premiering on Billboard who says, “the single arrives with an equally as charged music video…Weaving between close-ups of the two artists, the video is a natural fit for the intimate aesthetic of the collaboration.” Both “You Like This” and “Someone Like One” are now available exclusively on Beatport.
Ambassador of dark, driving techno Nicole Moudaber, has teamed up with Skin, the multi-talented Skunk Anansie front-woman, established DJ and fashion icon, for a collaborative EP entitled ‘Breed’. Two legendary artists in their own right, Moudaber and Skin have brought together cutting-edge creative and visual aesthetics to ensure Breed is an assault on the senses. The exceptional songwriting and performance abilities of Skin married with Moudaber’s production finesse both point to Breed being one of the most celebrated conceptual projects in techno. ‘Breed’ is dropping on September 18th and will be available exclusively on Beatport for two weeks via Nicole’s own imprint MOOD Records. Over a year in the making, ‘Breed’ is spearheading a new brand of innovative, pioneering techno. With visionaries Nicole and Skin at the helm the project is blazing a trail for the future of contemporary dance music.
Techno virtuoso Nicole will be returning to North America for a stretch of dates including Nicole Moudaber & Friends event on Coney Island’s world renowned boardwalk Saturday, September 12 in New York with Joel Mull, Hector, Lauren Lane and a special back-to-back set with just announced special guest Victor Calderone. The event is dedicated to her friend and beloved NYC nightlife legend, the late Rob Fernandez where Nicole will donate a portion of the proceeds to the Fernandez Family.
Buy “Someone Like You” and “You Like This” on Beatport here. Nicole Moudaber and Skin’s ‘BREED’ EP is out September 18 via Beatport.
BREED Tracklist:
1.  Don’t Talk To Me I’m Dancin’
2.  You Like This
3.  Someone Like You
4.  Organic Love (Mood Mix)
5.  These Walls Are Made Of Water
Nicole Moudaber Tour Dates
*September 4  Toronto, ON Canada @ Coda
*September 5  San Bernardino, CA @ Nocturnal Wonderland
September 7  Ibiza, Spain @ CircoLoco at DC-10
*September 12 Coney Island, NY @ Nicole Moudaber & Friends
*September 18  Miami, FL @ Trade
*September 19  Montreal, QC Canada @ Stereo
*September 25  Chicago, IL @ The Mid
*October 5 Houston, TX @ Stereo Live
*Denotes North American tour dates
For more information on Nicole Moudaber:
Facebook.com/officialpage
Twitter.com/NicoleMoudaber
Instagram.com/NicoleMoudaber
Soundcloud.com/NicoleMoudaber
www.NicoleMoudaber.com
For more information on Skin:
Facebook.com/SkinOfficial
Twitter.com/skinskinny
Instagram.com/skin_skunkanansie
www.SkinMusic.net
TweetShare
Related Stories