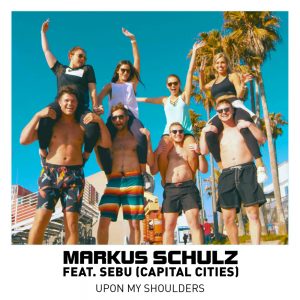 If Schulz history teaches us anything, it’s ‘don’t count on Markus to do the expected’! Whether it’s reinterpreting indie-folk with ‘Facedown’, getting collaborative with hip-hop’s hall-of-fame on ‘Sleepwalkers’, taking Dakota (and everyone else) down the rabbit hole or writing the lyrics for his ‘Watch The World’ album, his next artistic gymnastic is rarely more than a script-flip away.

The impulse behind ‘Upon My Shoulders’ came to Markus in a reflective moment shortly after his mainstage Tomorrowland set a year ago. “As a DJ, he says, when you look out across an audience like Tomorrowland’s and you see hundreds – thousands maybe, of people carrying others on the shoulders. It’s a powerful and stimulating and unifying sight, which sparks the imagination endlessly. Every one of those guys & girls has a connection with the other – a friendship and a story that – very likely – goes way, way beyond the physical bounds of the event. That thought, along with that unbeatable ‘upon your shoulders’ / ‘nothing can touch me’ feeling became something I really had to capture in a piece of music”.

The idea itself however proved to be more straightforward than the realisation.

“What I had in mind I knew needed a male voice. Inherently I also was aware that far from every singer-songwriter could pull off a song like that. To nail it requires some first-hand experience of its theme. It had to be exactly the right voice, with exactly the right lyrical touch and connection to it. It was, he laughs, a bit frustrating there for a few months. The back of my mind was telling me I’d heard that voice before. I just couldn’t put my finger on whose it was!”

That was until Markus & crew were in LA, front end of this year and – serendipitously – ‘One Minute More’ came on the radio. The voice – Markus was more than aware – belonged to Sebu, frontman for indietronica duo Capital Cities’.

It was says Markus “the best kind of a lightning bolt moment. Tim, Mike (from Grube & Hovesepian) and I had remixed ‘One Minute More’ four years back, precisely because we loved his vocal so much. I said ‘we have to get Sebu on this track’. From there, all the missing pieces fell right into place. He has realised that moment, the feeling, the story and all brilliantly. Exactly as I had it in my mind, back at Tomorrowland 2017”.

If ‘Upon My Shoulders’ sounds in even the remotest bit familiar, well no major surprise. As far back as May’s EDC LV, Markus has been trialling versions and edits of it at his open-air sets. The joy, the spirit, the feeling and those zero-cares moments have all been swept up and into its strummed guitars, bold drums, irresistibly throw-your-hands-up melody and feverishly infectious vocal. Exhilarating, ebullient, enriching – the song that’s going to complete your summer is right here!

“This one’s going out to ‘the real heroes’” says a tongue-in-cheek Markus. “If you’ve ever carried someone on your shoulders, either actually or spiritually – this one is all about you!”

Markus Schulz – We Are The Light