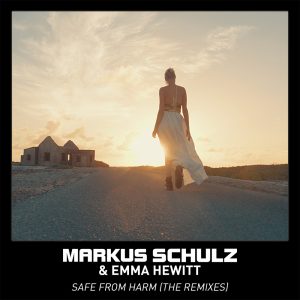 We gave it to you straight, now we’re giving it to you spicy! ‘Safe From Harm’s on the summertime remix track. Caliente!

So happy with its reception was he that Markus has moved to expand its bandwidth further. He’s jumped back behind the mixing desk to give it a nighttime respray and gotten Giuseppe Ottaviani and Dylhen on the horn for some remix collaboration.

After the Original’s radio gift, Markus’ new ‘In Bloom’ mix puts ‘Safe From Harm’ on a more emotive footing. He hovers Emma’s vocal harmonies in the background, and in some epic minute-on-minute build, teasingly draws out its ascension. Tension at its apex, he stands the drums down, parachutes in the pianos & pads and puts Emma’s dazzling song centre in the spotlight.

Returning the remix favour started by Markus’ rework of Giuseppe’s ‘Ozone’, Signore Ottaviani gives ‘Safe’ the most primetime spin of the three. Big on bassy boom, XL on the drum signature and swift of tempo, his mix has late night determination square between its crosshairs. Emma’s song assumes its most anthemic feel yet as, post-break, Giuseppe uses mainline and chorus to effect its elevation.

Frontend, Coldharbour’s Dylhen’s revision cuts the treble & midrange to deepen ‘Safe’s profile. He takes a lower-slung tempo & more minimal arrangement and marries it to tweaking FX frequencies & moodily pervasive LFO. He allows shafts of melody in post-drop, but for ‘Safe’s cooler-ether redux, this is your stop.

Three new versions of ‘Safe From Harm’ to cast floors headlong into summer – stream for yourself here https://coldharbour.choons.at/safefromharmrmxs from today.