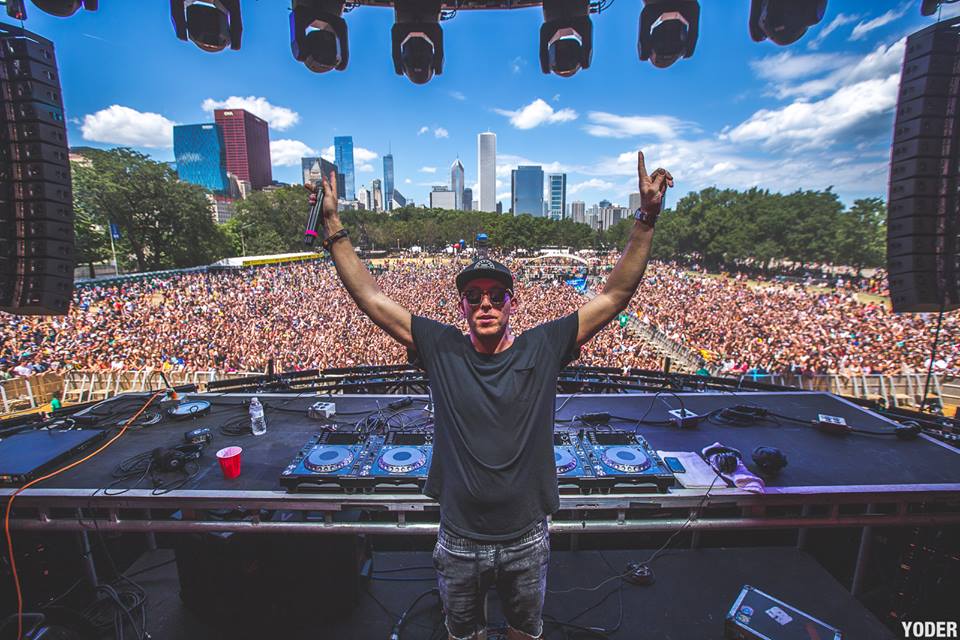 It’s easy to go and watch your favorite DJ/Producer play at a club or festival. But it’s not everyday you get to fire them some questions about what goes on behind the scene. After his set at Electric Beach this past Sunday at Skybar at Mondrian, I was able to steal him away for a quick interview. Finally coming home to LA after his tour, I’m hoping this interview can give you an idea of what it’s been like for our rising producer:

I know you’ve been going to the East Coast and Canada a lot as part of your tour. How do you prepare your sets from one coast to the other?

I go into all my sets with somewhat of a general idea and then feel it out. Every city everywhere is different and just kind of go with the vibe. I know I play a lot of my own music but you play the crowd everywhere you go.

Within the past 3-4 months, you’ve played a number of major festivals like Lightning In A Bottle and Electric Forest. And more recently, Lollapalooza. Give me some of your favorites highlites from some of those festivals

Umm just the amount of people is… SO different than a club. You’re talking like seven, eight thousand people. It’s a completely different vibe, mentality… It’s less intimate but it also is really amazing just such a huge crowd react to all your music.

Do you have a favorite venue to play? Favorite city?

San Francisco seems to be my favorite. The people are so amazing, so nice. Everyone comes up at the end talks to me, the energy at SF has been my favorite city.

How about least favorite?
I am not gonna say that.

The weirdest set? Meaning what….?

I don’t know, just throwing it out there!

Umm maybe this huge warehouse party in New York, Bang-On. I would say I got a little bit darker and deeper than I usually do. I don’t get to do that much, so it was really cool to just get vibe-y underground.

Bringing it back home a little bit, how would you describe the collaborative scene here in LA? I often see you guys work together in different ways whether it be guest mixing on Dr. Fresch’s radio, The Prescription, or reposting each other’s music on SoundCloud.

My LA family is amazing! We all are not doing the same exact thing, the same exact music, but we all support each other and help each other to come up. And you know, make LA the central hub for new music. Grow together versus grow by yourself. It’s so much more to come up and do it with your friends.

Yeah I think that’s really cool how you guys do that. I don’t necessarily see it in other cities.

We have a little clique.

Aha! Nice. So what does a normal day look like for you?
A normal day? It depends on what’s going on. If I’m on the road, it is waking up very early, hungover in a hotel room, getting a ride to the airport, flying to another city. And then unpacking, showering, getting ready for the set, going to dinner, playing and then doing it all over again. And then when I’m here, home in LA, it’s completely different: I’ll wake up early, go to the gym, have a nice breakfast and then sit down in the studio for 10-12 hours. Then watch some TV, some Game of Thrones. I’ll be like a little hermit for a while.

Thoughts on banning #EDM on Instagram?
I don’t like the idea of banning anything, I feel like it just causes a huge uproar. And I believe they retracted it as well. I’m very anti-censorship. As much as the word ‘EDM’ – especially to me –  feels like it hurts the genre and what I’m doing and what I’m about, it just leaves a bad taste in the mouth. But there’s no need to remove it from Instagram.

Zombie Apocalypse… What’s your melee weapon and which DJ/Producer would you team up with?
I’m gonna have to say 12th Planet coz he lives down the street in a huge compound and I feel like that would be the way to go. Coz I’m downtown LA and there’s no getting out of here. So I’m stuck down here. So I’m gonna go find a homie with the sickest pad. Or maybe even Carnage as well and go hang out with them and hopefully ride it out.

What’s your weapon though?
My weapon of choice? Machete. Indiana Jones style.