HOLY SHIP! 2015 will set sail for two voyages on the beautiful MSC Divina: January 3 – 6 and February 18 – 2. Before the ships leave dock on both weekends, organizers HARD Events, Cloud 9 Adventures and The Bowery Presents will host the official HOLY SHIP! pre-parties at Space Miami on January 2 and February 17. For each party, fans have two rooms of music to choose from for the night.

On January 2, catch back-to-back sets from Justin Martin and Dusky, Gorgan City and Kidnap Kid, Alex Metric and Oliver, and Sharam Jey with Shiba San in Room 1. Then on February 17, Bauuer, Jack Beats, Destructo, Milo Otis and AC Slater take over. In Room 2, The Buntings will be hosting their yearly “Officially Un-Official Shipfam Pre Party.” This room will consist of SHIPFAM DJs (HOLY SHIP! passengers who are also DJs).

HOLY SHIP! is heating up the high seas in 2015 with its biggest and best lineups yet. The first cruise ship features headliners Knife Party and Pretty Lights, Flume, Boys Noize, A-Trak, RL Grime and more. The second trek includes Skrillex, Fatboy Slim, Bauuer, DJ Snake, Basement Jaxx (DJ set), Ty Dolla $ign, DJ Mustard and many others. Beyond the music, fans will also have the chance to bid on cool items like photographs, posters, festival tickets and more to raise money in support of Positive Legacy – a non-profit whose mission is to integrate live music and service by engaging fans and giving back to local communities through humanitarian and environmental projects.

The Holy Ship! pre-party lineups are: 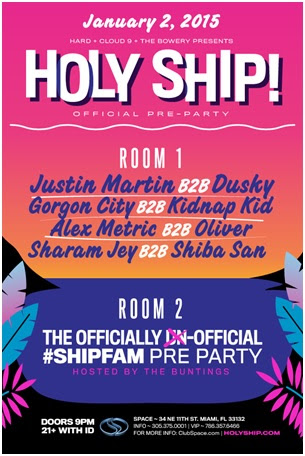