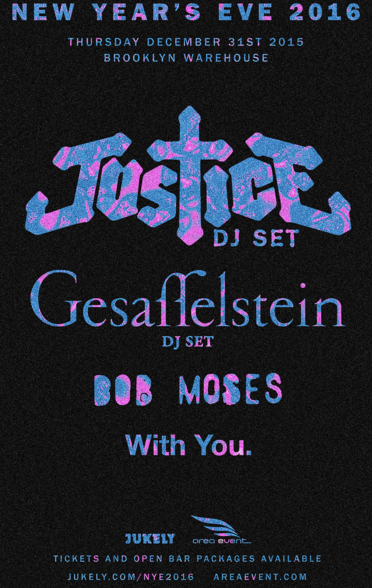 Jukley and Area Event threw a memorable party this New Year’s Eve. The dance music was vibrant, the venue was unique, and the crowd was lively.

Bob Moses played before midnight. This is a duo formed by the musicians Jimmy Vallance and Tom Howie. They are unique because Howie is a vocalist while Vallance is an dance music producer. Together, they make up Bob Moses. They were the perfect act to lead to the transition from 2015 to 2015. The vocals offered people an opportunity to look back at 2015 with nostalgia, while the beat made people excited for 2016. Together, Bob Moses’ music created an awesome atmosphere of both anticipation and energy that could not be found at any other NYE party.

Once 12:00 came about, Justice helped all the partiers greet 2016. This was an extraordinary experience for the crowd’s electro lovers as Justice returned to perform in New York City for the first time after a two year hiatus. The French duo did not disappoint their audience with their Grammy Award-winning music. They played their biggest hits, such as “D.A.N.C.E., “Civilization,” and “Electric Feel.” Justice also delightfully surprised partiers with remixes of famous songs. Some notable ones were The Pointer Sisters’ “I’m So Excited,”Joan Jett’s “I Love Rock N Roll,” and Junior Senior’s “Move Your Feet.” In general, Justice has a proven record of combining hard rock character with French electro house beats. The resulting music is one-of-a-kind, thus contributing to the lasting impression this night had on all listeners this night.

Gesaffelstein, a French EDM producer named Mike Levy, also showcased his talent this night. One can describe his music as energetic techno with decidedly dark and industrial undertones. This style of music worked perfectly for the ambience of the party. Amidst the warehouse’s black metallic walls, long hanging chains, and smoky air, Gesaffelstein’s industrial-sounding beat fit in well. People danced in an environment that was appropriate to the music they listened to, giving the people a lasting impression of the night. Some of his most memorable songs of the night were “Pursuit,” “Hate or Glory,” and “Viol.”

A few comments on the organization of the event are in order. The sound system used to transmit the music was perfect; all areas in the warehouse offered listeners an ideal listening experience. There were also minibars and food stations tactically scattered throughout the dance floor, basement, and outdoor area. The coat check could have been better organized but the fact that there were local DJs performing for those waiting in the coat check line was a wonderful bonus. It allowed rising dance music talents to share their music, and the fact that the event organizers gave them such an opportunity deserves the highest commendations. Overall, although the experience of this night will be difficult to replicate, memories of this night will last a lifetime.

When I first heard that there would be a NYE party in an abandoned, secret warehouse, I was skeptical. From an outside perspective, it is the antithesis of what I would consider to be a fun night. I thought: how could such a place host one of the biggest, most exciting events of 2016? But, when I got to the venue, I quickly understood.

The Secret Warehouse epitomizes the Brooklyn revival of the past few years: gritty, trendy, and effortlessly cool. An interminable coat check line was transformed from a party girl’s purgatory to a dance scene of its own as local DJs were given their own space to showcase their skills.Supporting local talent on the lower level is a brilliant marketing move, simultaneously soothing the savage lines that feel more like crowds, while also calling attention to some lesser known but certainly not lesser gifted musicians. (Even my own monstrous impatience was mollified– or at least, delayed– by some impressive tunes before the main act even started.)

Moving upstairs, we stepped into an open space that Manhattan landlords could only dream of getting their hands on. We were greeted by the honeyed tones of Bob Moses– a duo that marries the melodious vocals one hears in indie music with the complex synthetic beats of EDM. Though I was initially skeptical about outdoor restroom facilities, I must say that never before have I not stood on an interminable line for the ladies’ room– and what a glorious feeling, indeed, not to waste precious party time. Furthermore, the open outdoor area meant having a quieter space to kindle new friendships over borrowed cigarettes. (And if I wasn’t exactly the British heiress I may or may not have convincingly embodied, then at least my companions were too chivalrous to openly call my bluff). While drink prices were predictably dear for a NYE soirée, and options were limited (who doesn’t stock soda water?) at least they were served quickly and at full strength.

Comfortably flirtatious from several gin and gingers and strangers’ smokes, I was ready to hit the dance floor. The sweet strains of Justice greeted me, thumping rhythms rounding out the gaping acoustic space. Due to the cavernous nature of the warehouse, the dance floor maintained a steady horde of bodies without ever feeling suffocating. Immediately, one sensed a different vibe from so many Manhattan dance music scenes. Gone was the over-caffeinated mania of tryhard out of towners on the dance floor; instead, a blasee, supremely chill attitude wafted across the floor like so much smoke, curling around the dancers, cocooning us in a pulsing warm purple haze. The light show enhanced Justice’s beat rather than distracted from it, lending the scene an air of confident skillful was in its orchestration. One was reminded that this was a production of a group that has spent the last decade perfecting its art.

Yet even after Justice left the stage, the high caliber of the evening continued. It’s far too easy for a venue to stack a NYE set with its best acts first, leaving its attendees to make due on pure adrenaline, slight tinnitus, and generous amounts of vodka once 12:01 hits; not so at The Secret Warehouse. Gesaffelstein proved a strong act unto himself, keeping the beat flowing early into the morning, marking the night as one of quality. Slipping deeper into the crowd, we immersed ourselves into the night, haphazardly departing with the throngs and stumbling out of an Uber dangerously close to 5 am. If NYE sets the tone, 2016 will indeed be the year that I make the trek off the island and into some well-worthwhile venues.

Written by Mateusz and Mary–representing Dionysius and Apollo, respectively