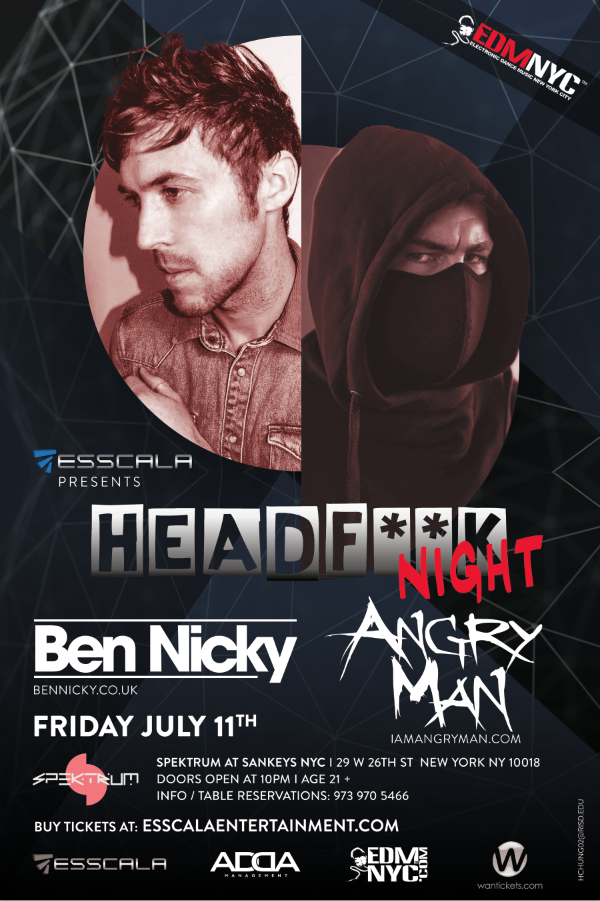 The fine folks at Esscala don’t mess around when it comes to putting together a great trance party.  The always bring together the best in artists, venue, sound system, and the greatest fans around.

This was as true as ever with their Headfuck Night w/ Ben Nicky and Angry Man this past Friday, July 11th at Sankeys.  Originally planned for the second room Spektrum, we were all thrilled to hear late that afternoon that they were moving it to the main floor.  This was my first visit to the spot formerly known as D36 in its new incarnation.

That said, I had always heard great things about the Sankeys brand from the UK, with a number of epic Garuda label nights among other huge parties.  My recollection of D36 was of a solid spot but I felt like the DJ booth was a bit high above the dance floor.

Sankeys brought the booth down to just above crowd level, which helps to make the fans feel more engaged.  The sound system was totally on point, a very nice change from Chrystie 141’s setup.  Additionally the LED screen and lighting at Sankey’s are awesome, and there’s plenty of VIP spots and additional seating for those who just needed a breather.

Ben started around midnight and dropped a wide range of tracks including a couple of my favorite productions of his  “Brave Heart” ft. Chloe Stamp, and “Air” recently featured on ASOT.

We got a taste of recent fav Ferry Tayle’s “Way Back Home,” and even some old school Tiesto “Lethal Industry,”  What I’ve always enjoyed about Ben’s Headfuck sets is that he takes well known tracks and gives them an edge, with mixer effects and a mastery of the twisted mashups.

He had a little tribute to the Emery siblings with by dropping Gareth’s “U” ft Bo Bruce right into Luke Bond ft. Roxanne Emery’s, “On Fire,” as well as Gareth Emery ft. Christina Novelli vs. Astrix – Concrete High (Ben Nicky Psy Mashup)

Other highlights from Ben’s set included (please let me know if I missed a mash/remix ID):
JOC ft. Audrey Gallagher “Big Sky,”
SiPat “Brush strokes,”
Nero – Drop Your Promises (Indecent Noise Mashup)
PVD “For an Angel,”
Aly and Fila “Where to Now,” (Will Atkinson Gold Mix)
Above and Beyond vs. Omnia and Ira “The Fusion Tonight,”
Prodigy “Smack my Bitch Up”  (ID Remix/Mash?  Maybe Richard Durand bootleg
PVD ft. Plumb “I Don’t Deserve You” (GO remix I believe)
Craig Connelly and Christina Novelli “Black Hole” (JVD remix)
Binary Finary “1998” (James Dymond remix)
NoizeDecay “Shake That Ass” (that sample “If you haven’t danced yet what the fuck have you come for!”)

Around 2am, the masked man known for being Angry began his acidy, psy filled set.  It was awesome to see fans don the Angry Man hood and mask attire, and everyone was super excited to catch this guy in action.  Admittedly, for me to even try to ID anything aside from his remix of Oakenfold’s “Southern Sun” would be an effort in futility.

To me, hearing Angry Man’s set after Ben’s is just more proof of how different two artists within the same genre can be.  Don’t get me wrong, I enjoyed both sets for what they were… but they’re vastly different subgenres of trance.  I definitely felt like could lose myself more in Angry Man’s set.  I wasn’t focused on stopping to sing along with every other track so I had more of a tendency to dance and let go and it definitely seemed like most of the other fans were with me on that.

AM wrapped up his set around 4am, and all in all I would say it was another awesome night for trance in NYC… just enough of each style to keep the trance family happy and groovin along!