Dubfire will bring his acclaimed audio visual concept dubfire:live HYBRID to some of the worlds biggest music events in 2015. dubfire:live HYBRID, the techno star’s most ambitious achievement to date, will be showcased at events including Sonar, Time Warp Argentina, Caprices Festival and SW4 with more to be announced.

First premiered at the annual Amsterdam Dance Event, Dubfire’s innovative live show reinvents the concert experience by seamlessly weaving together elements of 2D and 3D animation with live audio and lighting to explore the intersection of science and technology – of man and machine – and their resulting evolution and inevitable fusion.

Dubfire’s audio visual concept will be touching down at major events including Caprices Festival, Time Warp Argentina, Baum Festival, Sonar, SW4 with more special one off shows still to be announced.

Says Dubfire: “I’d always intended for my music to be performed live, supported by the latest advancements in music, stage design, lighting and sound technology. It took me years to build up a body of work that I’m proud to stand behind and to find the team to create the HYBRID show. It’s been an incredibly inspiring ride and I’m tremendously excited to finally bring the show to the fans who continue to support me and my sound”   Presenting at 2015’s major electronic events, don’t miss your chance to experience this years most talked about electronic event. Take a sneak preview at what’s in store here:  https://www.youtube.com/watch?v=iuORN3mydD0

PLUS MORE DATES TO BE ANNOUNCED

It was as if a spell had been cast upon the building. Dubfire:live- Hybrid was well deserving of the weeks of build-up- DJ Mag, CA

Now, as one of the most inspirational and powerful techno DJ’ in the world, Dubfire is able to confidently step up and reinterpret his music for the fans who always wanted him to play live – DJ Mag, USA

Hybrid; an ambitious – and we have to say very successful – set audio / video in which rides with safety and with renewed inspiration in the stylistic canons minimal tech-house key – Soundwall, IT

The cinematic experience of Dubfire’s performance feels like you are inside a movie…indeed the highlight of this years Amsterdam Dance Event – The Creators Project, Vice, NL

Dubfire creates a unique experience with his live show…one of the highlights of a fantastic ADE – The Sun, UK

We don’t exaggerate when we tell you the event was unlike anything we had previously seen or heard before anywhere, let alone at ADE – Thump, US

However, there’s little doubt that the night belonged to Dubfire, whose North American debut of his dubfire:liveHYBRID performance was a cinematic excursion that truly put the “techno” into “technology.” Combining 2D and 3D visuals that told a loose story of man and machine coming together as one, attendees were treated to an experience not often seen within the genre. – DJ Times, US

Playing behind four panels that enhanced and refracted his shadows, he(Dubfire) unveiled his new live show on Friday night, captivating the crowd with a spellbinding combination of minimal techno and trippy rendered visuals. – Billboard, US

While techno shows are often thought as a low-tech affair, Time Warp US got a pleasant dose of technology with the unveiling of Dubfire’s newest live show experience…. the crowd exploded in applause, immediately making the performance a highlight of the evening. – EDM Tunes, US

It was only for Dubfire’s US debut of his live HYBRID set, which featured an awesome visual display featuring a series of translucent squares that should be seen to be fully understood – Live for live music, US 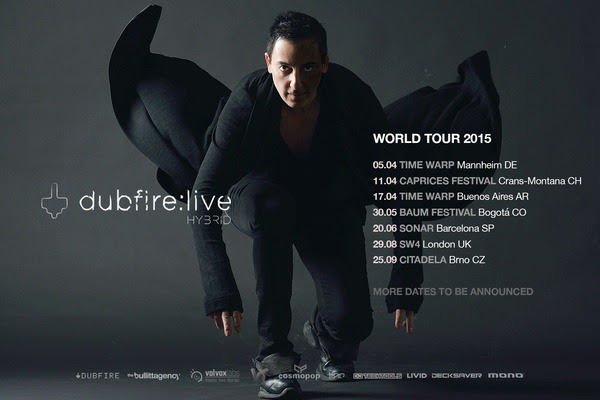